Explaining the widening distribution of Body Mass Index A decomposition analysis of trends for England, 2002–2004 and 2012–2014 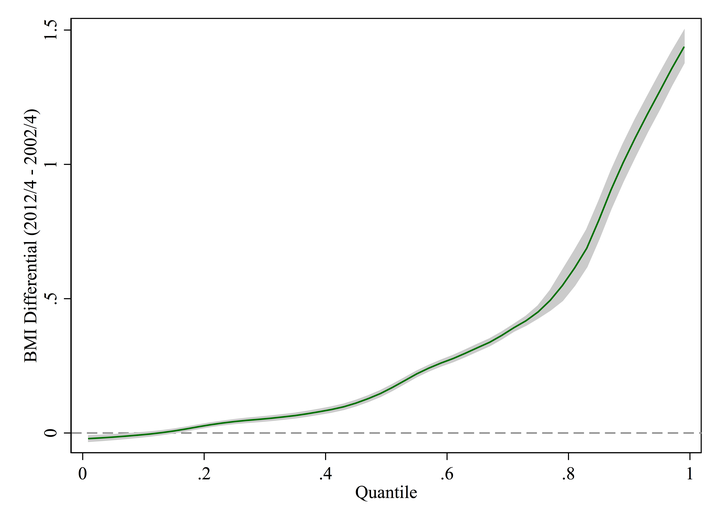 While there is increasing international evidence for the widening of the distribution of body mass index (BMI), there has been little attempt to explain this trend. The aim of our study is to examine whether the trend can be explained by compositional changes within the population or contextual changes in the relationships between explanatory variables and BMI. Data from the Health Survey for England for 2002–2004 and 2012–2014 were used. BMI was our outcome variable and explanatory variables included age, sex, race, education, occupation, and physical activity. We examined how predictors of BMI varied at the 10th, 50th, and 90th percentiles using unconditional quantile regressions. Oaxaca‐Blinder type decomposition analysis was then applied to examine whether contextual or compositional explanations accounted for changes in the distribution between time periods. We found that changes in the nature of relationships observed by our coefficient values accounted for the majority of the difference in BMI at the 90th percentile in 2012–2014 compared to 2002–2004. Race, physical activity, and socio‐economic status were the primary reasons for explaining the continued growth of the right tail of the BMI distribution. Compositional changes in the population were less influential, but may have offset some of the contextual changes to relationships. Changing relationships between predictors of BMI reflect systematic changes in the determinants of BMI, leading to the widening of the BMI distribution. Our results demonstrate the importance of multi‐tiered policies aimed at tackling the varying influences across the BMI distribution.