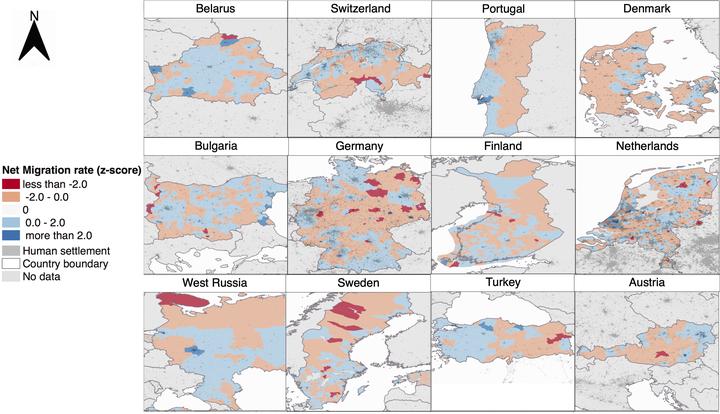 The classical foundations of migration research date from the 1880s with Ravenstein’s ‘Laws of migration’, which represent the first comparative analyses of internal migration. While his observations remain largely valid, the ensuing century has seen considerable progress in data collection practices and methods of analysis, which in turn has permitted theoretical advances in understanding the role of migration in population redistribution. Coupling the extensive range of migration data now available with these recent theoretical and methodological advances, we endeavour to advance beyond Ravenstein’s understanding by examining the direction of population redistribution and comparing the impact of internal migration on patterns of human settlement in 27 European countries. Results show that the overall redistributive impact of internal migration is low in most European countries but the mechanisms differ across the continent. In Southern and Eastern Europe migration effectiveness is above average but is offset by low migration intensities, whereas in Northern and Western Europe high intensities are absorbed in reciprocal flows resulting in low migration effectiveness. About half the European countries are experiencing a process of concentration toward urbanised regions, particularly in Northern, Central and Eastern Europe, whereas countries in the West and South are undergoing a process of population deconcentration. These results suggest that population deconcentration is now more common than it was in the 1990s when counterurbanisation was limited to Western Europe. The results show that 130 years on, Ravenstein’s law of migration streams and counter-streams remains a central facet of migration dynamics, while underlining the importance of simple yet robust indices for the spatial analysis of migration.