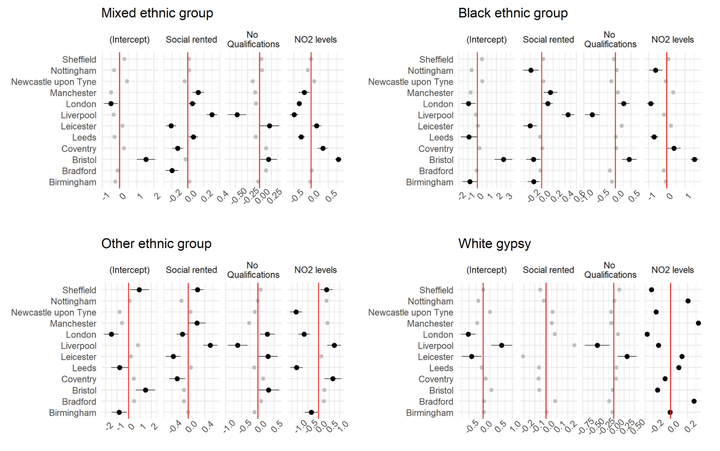 The literature of spatial inequalities is currently “fragmented” across ethnic segregation and built environment domains. Inequalities in these dimensions are often considered in isolation one from another. For example, ethnic segregated areas are often more disadvantaged in terms of unemployment, housing conditions and access to services. By using a combination of the most recent Census and a series of openly available datasets related to ambient urban environment characteristics at the Lower Super Output Area (LSOA) for the 12 biggest cities in England, we employed a series of multilevel models to explore the within and between city variations in the relationship across ethnic segregation, and key socioeconomic and built environment features of neighbourhoods. The results showed that ethnic minority segregated areas are associated with distinct and remarkably systematic patterns of socioeconomic characteristics, but do not lack access to good quality schools and public transport compared to the predominant white population communities. Ethnically segregated communities seem to consistently experience higher unemployment, long-term illness, higher average household size, and high exposure to pollution compared to white population groups across English cities. These relationships are remarkably similar across ethnic groups evidencing the extent of systematic persistent disadvantage experienced by minority communities relative to white populations. Moreover, the strength of these relationships varies widely across cities, although the overall systematic pattern prevails.