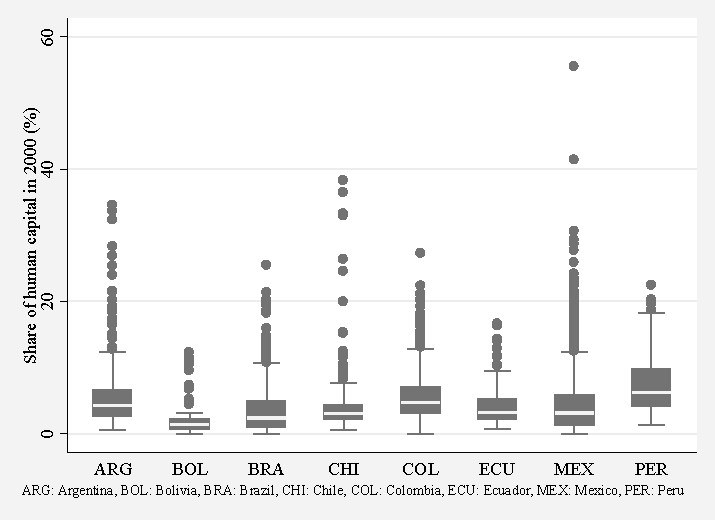 In the context of the transition to a knowledge-based economy, an increasing number of studies have explored the spatial distribution of human capital on economic growth. Most of this work has been concerned data from North American and European regional contexts. However, in Latin America and the Caribbean (LAC), the geography of human capital has been remained largely unexplored. Using a unique dataset of eight LAC countries comprising 5,978 city-level regions, this paper investigates the evolution of the national stock and spatial distribution of human capital and explores the factors that influence a region’s share of human capital. The analysis shows that the national stock of human capital has increased in all eight countries over the past last five decades to 2010; however, it has remained smaller than in advanced economies, such as Australia, Japan and the United States. The results reveal that human capital in LAC countries is concentrated in regions which include areas of main cities and their immediate surrounds. The findings also suggest that a unique combination of factors collectively plays a role in explaining regional differentials in human capital accumulation. Of these, the provision of public amenities is shown to be the most prevalent factor influencing human capital differentials in each of the LAC countries. In contrast, the share of regional foreign-born workforce as a measure of regional diversity only helps to explain regional differences in human capital stock in Brazil.