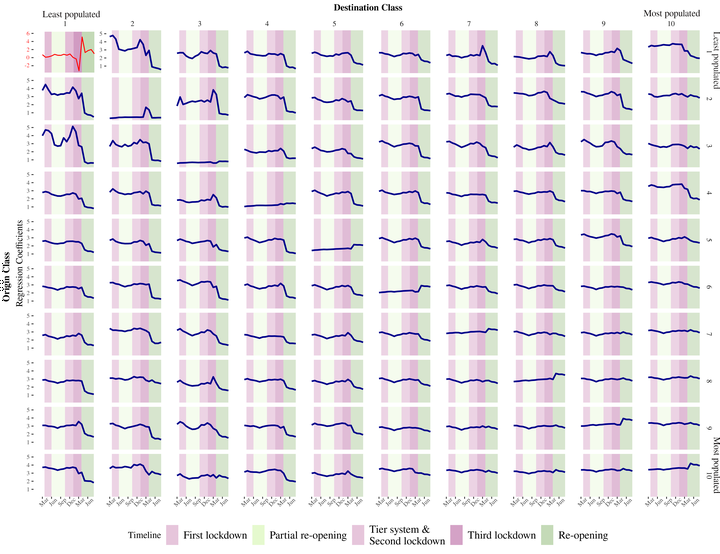 Existing empirical work has focused on assessing the effectiveness of non-pharmaceutical interventions on human mobility to contain the spread of COVID-19. Less is known about the ways in which the COVID-19 pandemic has reshaped the spatial patterns of population movement within countries. Anecdotal evidence of an urban exodus from large cities to rural areas emerged during early phases of the pandemic across western societies. Yet, these claims have not been empirically assessed. Traditional data sources, such as censuses offer coarse temporal frequency to analyse population movement over short-time intervals. Drawing on a data set of 21 million observations from Facebook users, we aim to analyse the extent and evolution of changes in the spatial patterns of population movement across the rural-urban continuum in Britain over an 18-month period from March, 2020 to August, 2021. Our findings show an overall and sustained decline in population movement during periods of high stringency measures, with the most densely populated areas reporting the largest reductions. During these periods, we also find evidence of higher-than-average mobility from highly dense population areas to low densely populated areas, lending some support to claims of large-scale population movements from large cities. Yet, we show that these trends were temporary. Overall mobility levels trended back to pre-coronavirus levels after the easing of non-pharmaceutical interventions. Following these interventions, we also found a reduction in movement to low density areas and a rise in mobility to high density agglomerations. Overall, these findings reveal that while COVID-19 generated shock waves leading to temporary changes in the patterns of population movement in Britain, the resulting vibrations have not significantly reshaped the prevalent structures in the national pattern of population movement.